When Mixed Bag Media approached GLUE to create its company ident (an ident or identifier is an animated version of a logo, sometimes called a stinger), we were delighted an award winning Irish film and television production company would trust us with their logo in 3D. The feature film release of “A Nightingale Falling” has this animated ident in the opening credits – book your ticket to the first screening today 12/09/14. This blog post will detail some of the elements used to create this logo in 3D.

The below image shows the wireframe, shaded and rendered (the process of automatically converting 3D wire frame models into 2D images with 3D photorealistic effects) version of the logo in 3D. Adding a HDRi environment and creating a bump texture really helps the 3d text stand out and defines the material.

At GLUE we use 3dsmax software for all our 3D wizardry from 3D character animations to fire, smoke and liquid simulations and in this case, a logo in 3D. More often than not when creating 3D text and simpler 3D objects we tend to use the Element 3D plugin for Adobe After Effects but in this case we used the more powerful 3dsmax for better raytracing (reflecting other objects in the scene as well as the environment). “In computer graphics, ray tracing is a technique for generating an image by tracing the path of light through pixels in an image plane and simulating the effects of its encounters with virtual objects.” 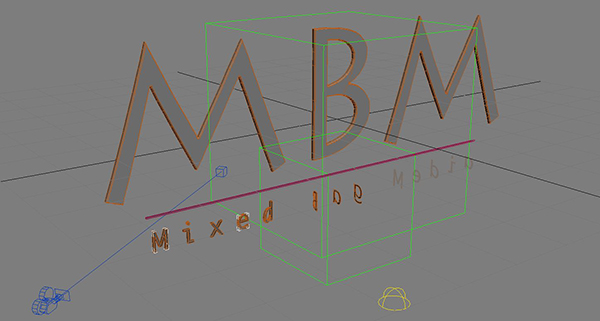 Also, in the above image in addition to the text itself, you can see the grey grid used in 3D space, the blue camera and target, a yellow skylight to project the HDRi environment and two powerful green boxes called “Dummies” which are used to link objects in the scene to enable a more controlled animation process.

After the logo in 3D animation is rendered, we move on to compositing which is the process of digitally assembling multiple images to make a final video.

Extra elements such as smoke and dust are composited in and the final touches of a few lens flares are added. Depth of field blurring finishes the logo in 3D ident off before its sent for audio production. In the YouTube video below you can see our work in the first few seconds of the “A Nightingale Falling” trailer.

You can find more info about this feature film on the IMDb website.

GLUE not only work closely with production companies to create visual effects, we also provide our customers with custom, bespoke idents which are tailored specifically to suit and promote your business.