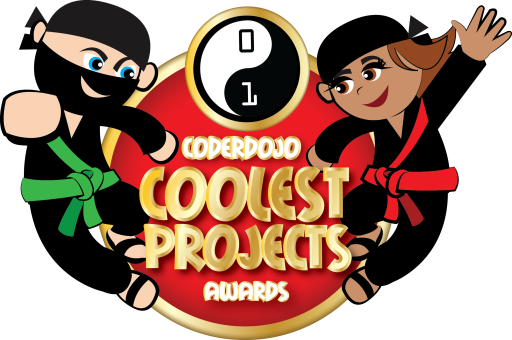 Over the last week, we created a series of animations for the CoderDojo Coolest Projects Awards – which was held in Dublin’s RDS and proved to be a resounding success.

Started in 2011 and now in its fourth year, the Coolest Projects Awards are a showcase of the CoderDojo movement which offers community-based, classes aimed at children aged between 7 and 17.

In these classes, children can learn how to code, develop websites, apps, programs, games and explore the possibilities of technology in an informal and creative environment.

Some of the projects on display and their applications really left us in awe at the ingenuity and resourcefulness of the children involved.

As well as creating animations for the awards, GLUE’s own Ray Mongey was also called on to be a judge at the event.

We were tasked with creating various animated cutscenes using CoderDojo’s Ninja graphics, these were to be displayed at the event on four 16ft x 9ft screens!

This involved modelling the ninjas (and a dojo for them to practice their skills in!), unwrapping/texturing, rigging, skinning, animating and compositing the boy and girl ninjas, as well as including some nice animated cloth dynamics to the CoderDojo flag.

This project had a short turnaround, but it was no problem to our animation team, who helped in streamlining our production pipeline, whilst working tirelessly to achieve the final results!

We’re really pleased to see that both CoderDojo and the kids loved our animations.

Thanks so much to @GLUEVFX for their amazing work on creating the animations for the #coolestprojects. You rock! pic.twitter.com/3pVECFE752

Our team had a brilliant time at the event viewing and discussing the projects with some of the smartest young minds in the country. It truly is amazing to see what they’re creating at such a young age. We’d like to congratulate CoderDojo for putting on such a great show.

GLUE at VFX Summit Dublin The GLUE stand at the VFX Summit Dublin 2013 in the Science Gallery. Irelands VFX and Animation Event November 29 / 30, 2013. It was a great suc...
Adding Hair and Fur to CG Creatures It's not only fancy 3D and motion graphics we create here at GLUE, we also bring to life CG creatures. Above find a video breakdown for a Vision 2...
Creating 3D Animated Characters One of our recent projects involved the creation of a Halloween themed 3D animation. The scene takes place in an evil scientist’s lair. We wanted to...
GLUE Batman V Superman competition Earlier this year, GLUE put out a blog about upcoming films we’re excited about. To celebrate the most notable of these upcoming films, GLUE has te...